The region of Castile and Leon (in Spanish: Castilla y León) is situated in the north-west of Spain. A short drive from Madrid, it is the largest region of Spain containing nine provinces all easy to reach by car. This region is particularly famous for tapas and its cured sausages and hams (You’re welcome, jamon lovers), roasted suckling pig, roasted lamb and of course it’s wine production which pre-dates even the Roman occupation (which began in the first century BC). I had the pleasure last month to experience this gorgeous region of Spain which is encapsulated by the beautiful historical architecture, friendly people and world famous tapas. In saying that, here is my guide to a selection of the provinces in Castilla y León; a region I highly suggest you visit this summer.

To do in Segovia
The Aqueduct of Segovia
Definitely the defining feature of the city, this aqueduct dates back to the 1st or 2nd century AD! The reason for its infamy is due to it being one of the Roman’s extraordinary engineering accomplishments. The structure transported fresh water into the town of Segovia from 14km away with the highest arch reaching almost 29 meters in height. 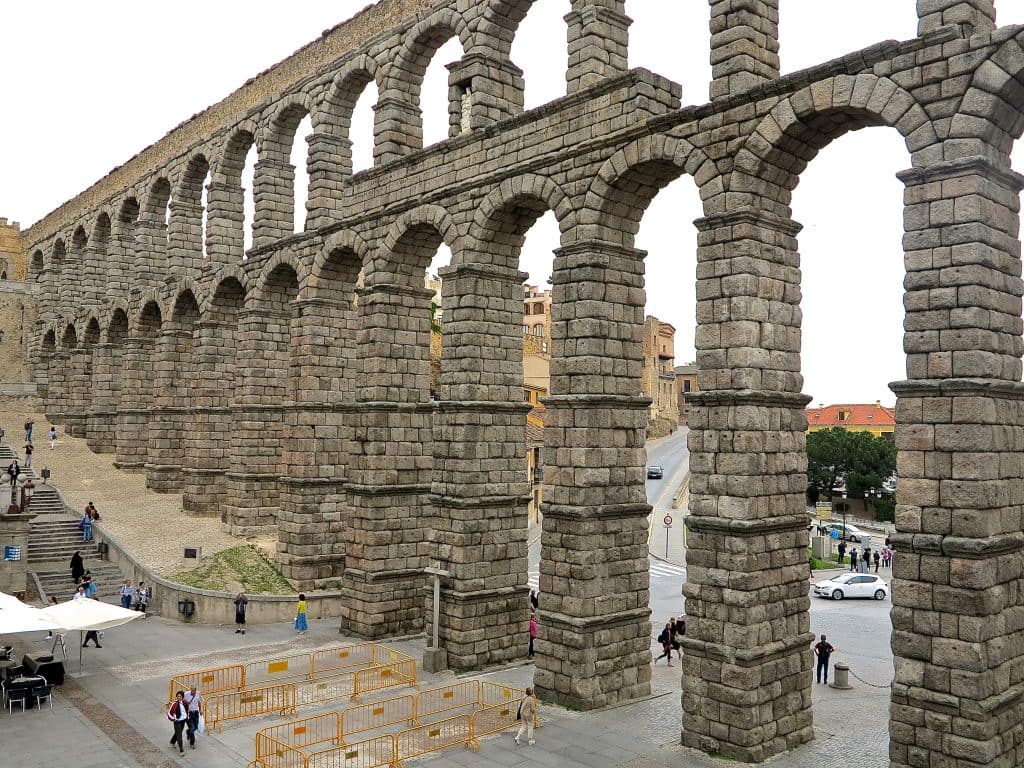 The Aqueduct of Segovia

Alcazar of Segovia
Said to be modeled on Disney’s The Sleeping Beauty, the Alcázar was originally built as a fortress but was also used as a royal palace, a state prison, an artillery college and a military academy. It’s definitely worth strolling around the magnificent building and if you’re afraid of heights, then do not look down on your way in! 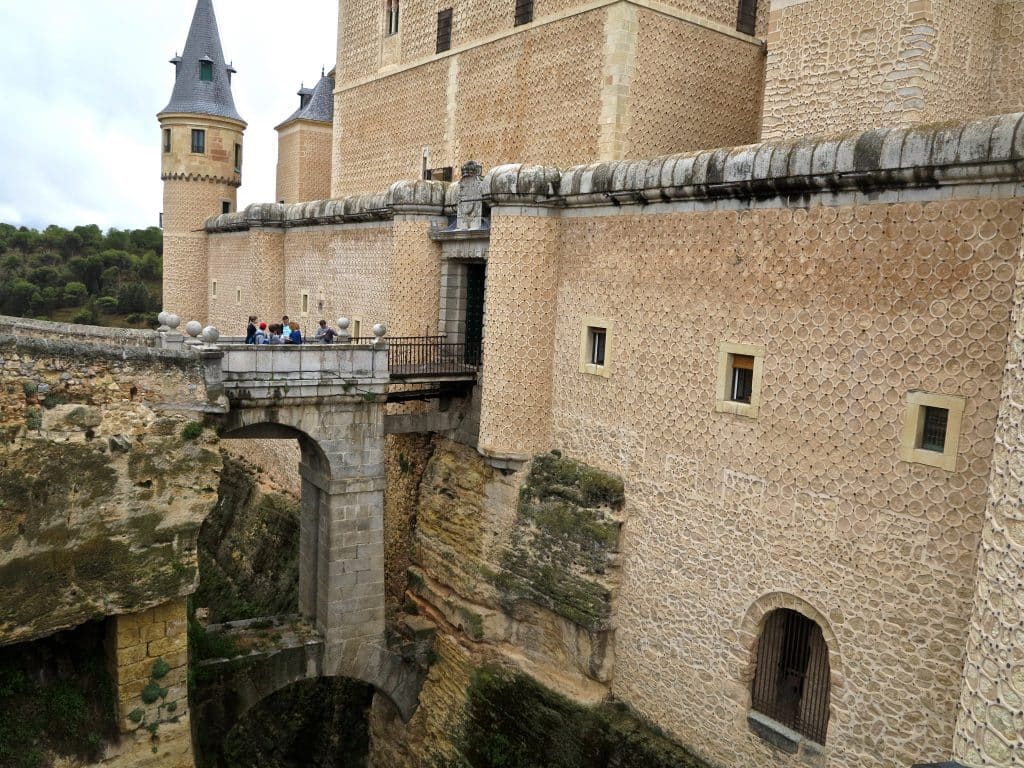 Segovia Cathedral
I highly recommend paying a visit to Segovia’s stunning Roman Cathedral which is entirely built in Gothic style. It’s located in the main square (Plaza Mayor) and was the last Gothic cathedral built in Spain. 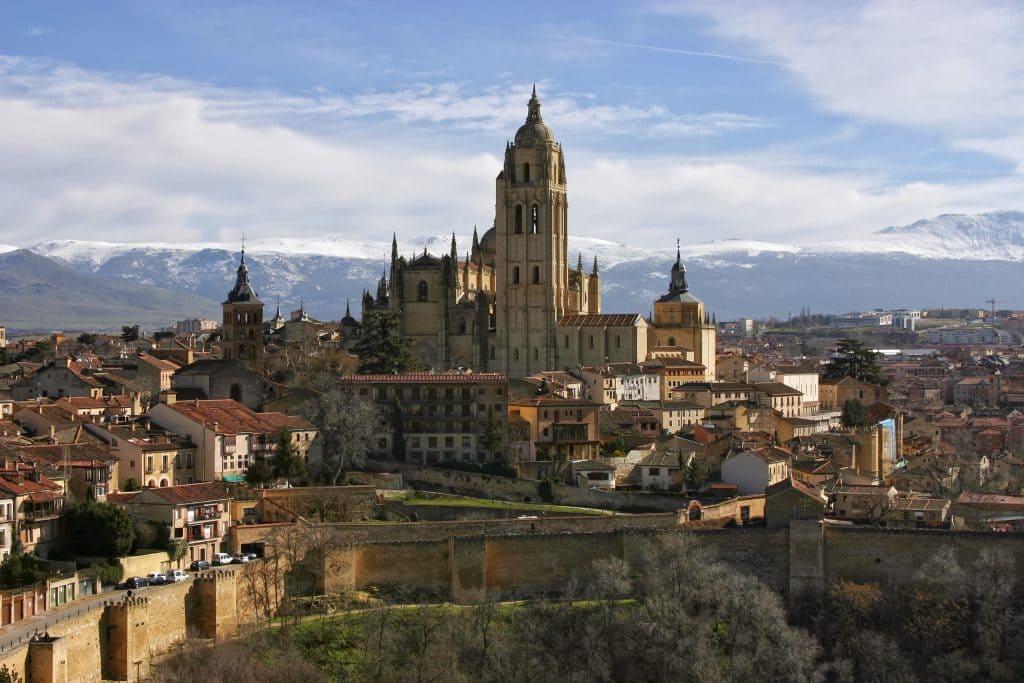 To eat in Segovia
Meson de Candido: An institution that defined the traditional dishes of Segovia from its opening in 1786. The now fourth generation family run restaurant has a charming interior in traditional Segovian style. Must try’s include the Large White Bean Stew from La Granja and of course the world famous Roasted Suckling Pig. The best part? In keeping with tradition and to demonstrate the crispyness of the pig, Mr. Candido cuts it up in front of you with a porcelain plate! 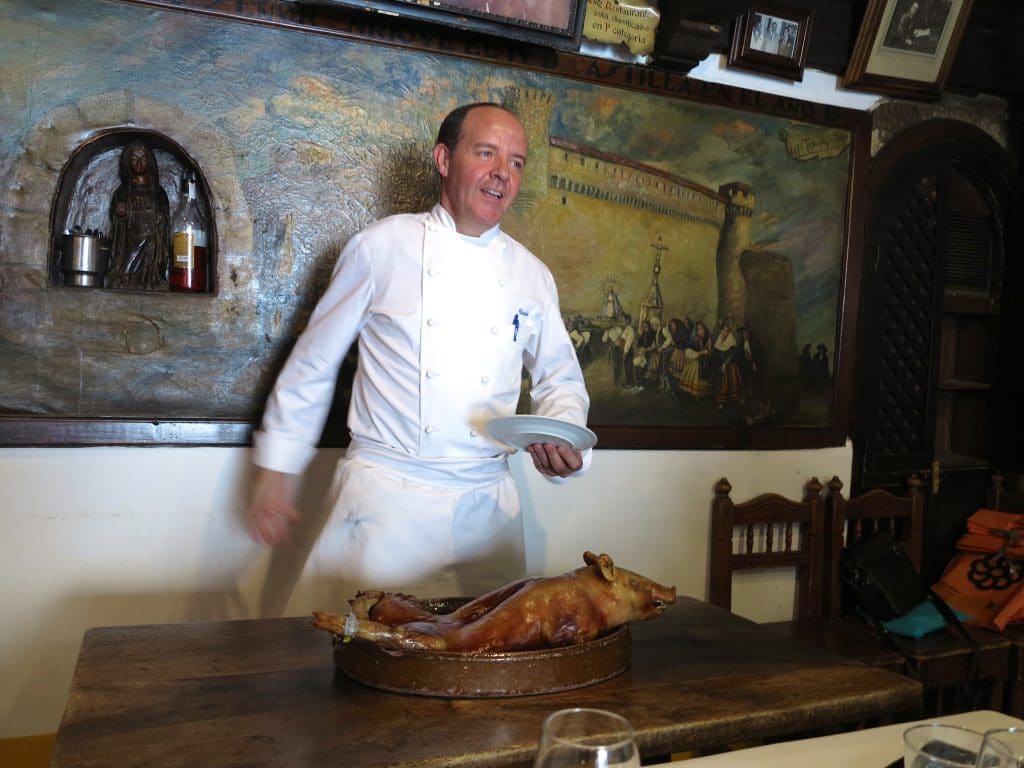 El Fogón Sefardí: If you’re looking for a more tapas style meal, this restaurant is where you need to be! They were winners of the “Concurso de Tapas de Segovia” in 2007, 2008 and 2009, and were also selected to participate in the national tapas concruso the last four years. Their food is an expression of typical Jewish cuisine from the region. A must try is their fried eggplant with honey and of course their award winning tapa: their twist on the Melhojas the Berengena. 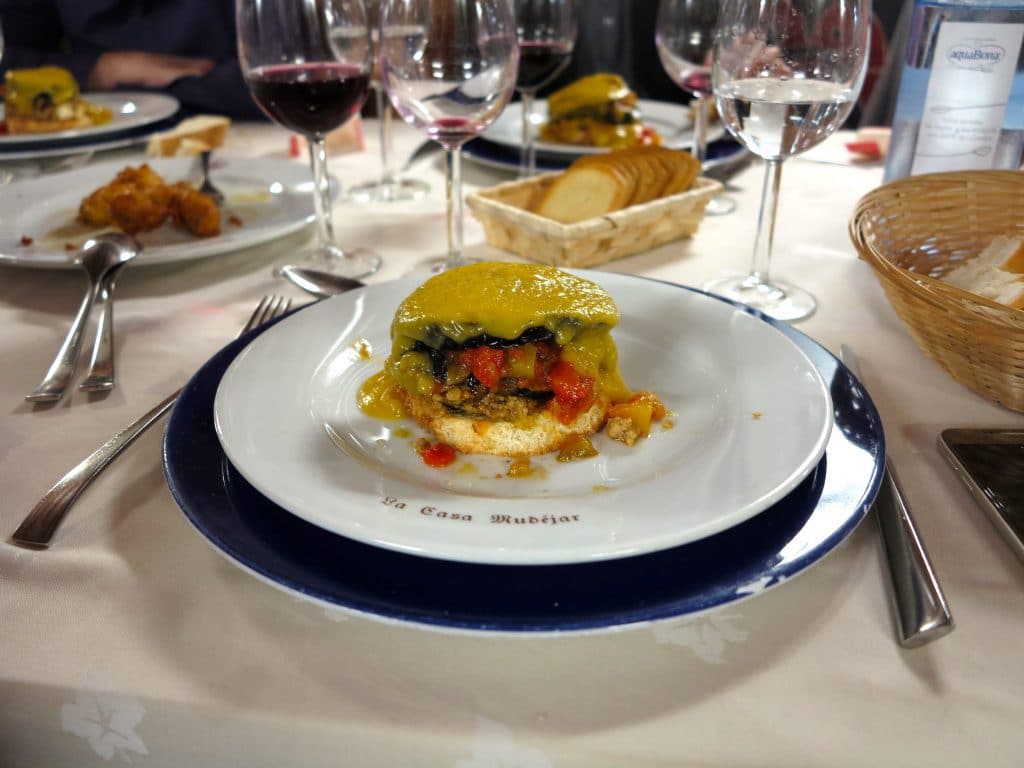 To sleep in Segovia
Hotel Palacio San Facundo : A gorgeous 16th-century palace turned luxury hotel boasts an excellent location between Segovia’s Cathedral and the historic aqueduct with the main square being a short 100m away. The rooms are clean, the beds are comfortable and your suite will contain everything you need for your stay.

60km from Segovia, Cuellar is a small and quiet town I recommend stopping at for a few hours to visit a number of their historic monuments and enjoy a delicious lunch! There are a number of very old churches you can visit like the Church of San Martín and the Church of San Esteban, but the must visit in this town is the gorgeous Cuéllar Castle. Built between the 13th and 18th century, you can have your prince/princess moment walking in between the ancient walls of this castle. Nowadays the castle is used as a busy high school, so prepared to have a few onlookers as you make your tour. 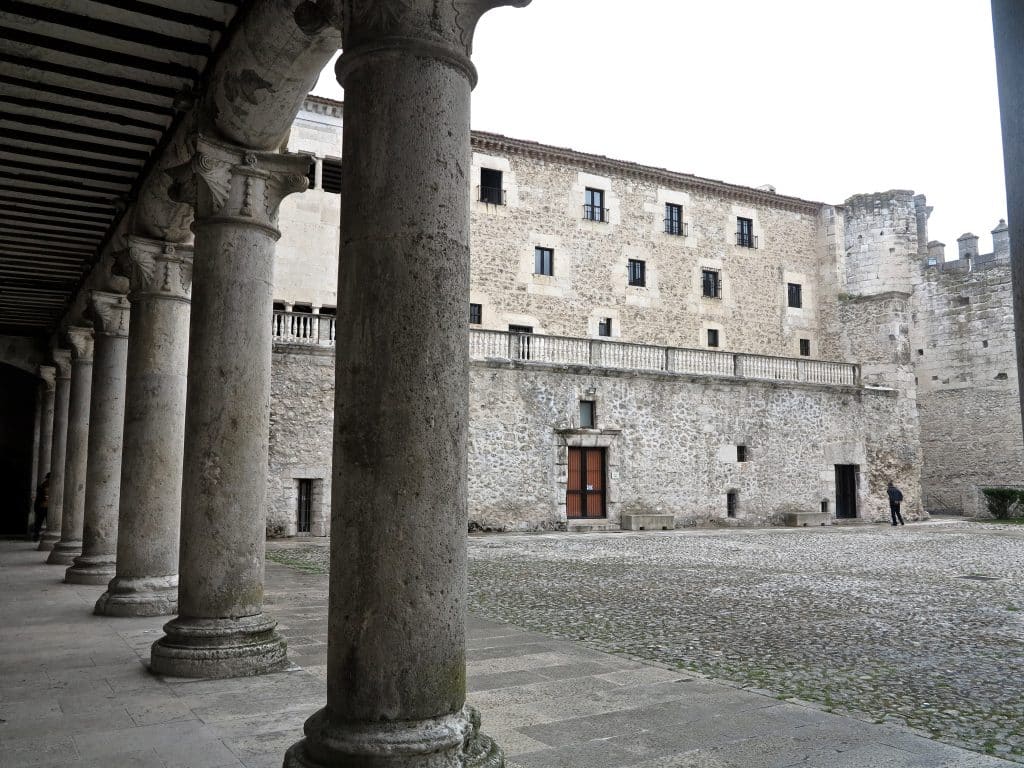 To eat in Cuellar
Hotel Meson San Francisco: The perfect spot to refuel before you continued your day. We dined with the tasting menu of “Bottom Las Edades Reconciliare”, however you can not go wrong with anything on their a la carte. This restaurant is famous for their roast lamb which is cooked for hours in a coal oven. 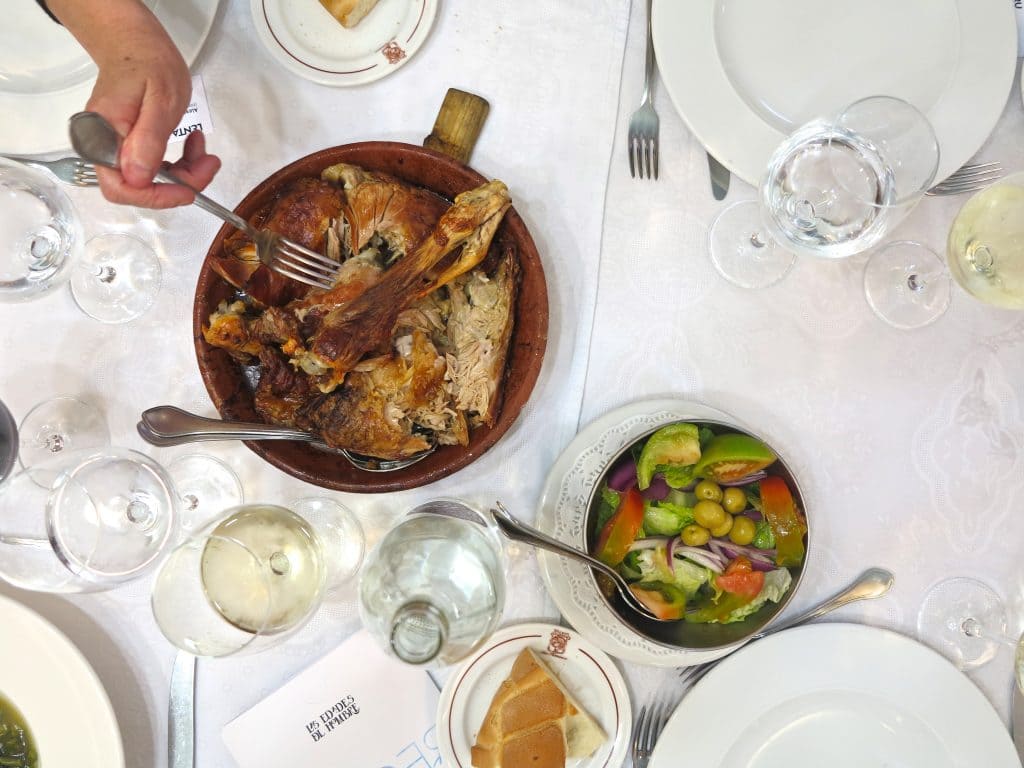 To see in Valladolid

Peñafiel Castle
I highly encourage you to visit this gorgeous castle because the view from the top of the walls and towers is absolutely spectacular! Views of Peñafiel and the green valleys beneath will take your breath away and if you look hard enough, you’ll be able to find the bullfighting square. Can you spot it? 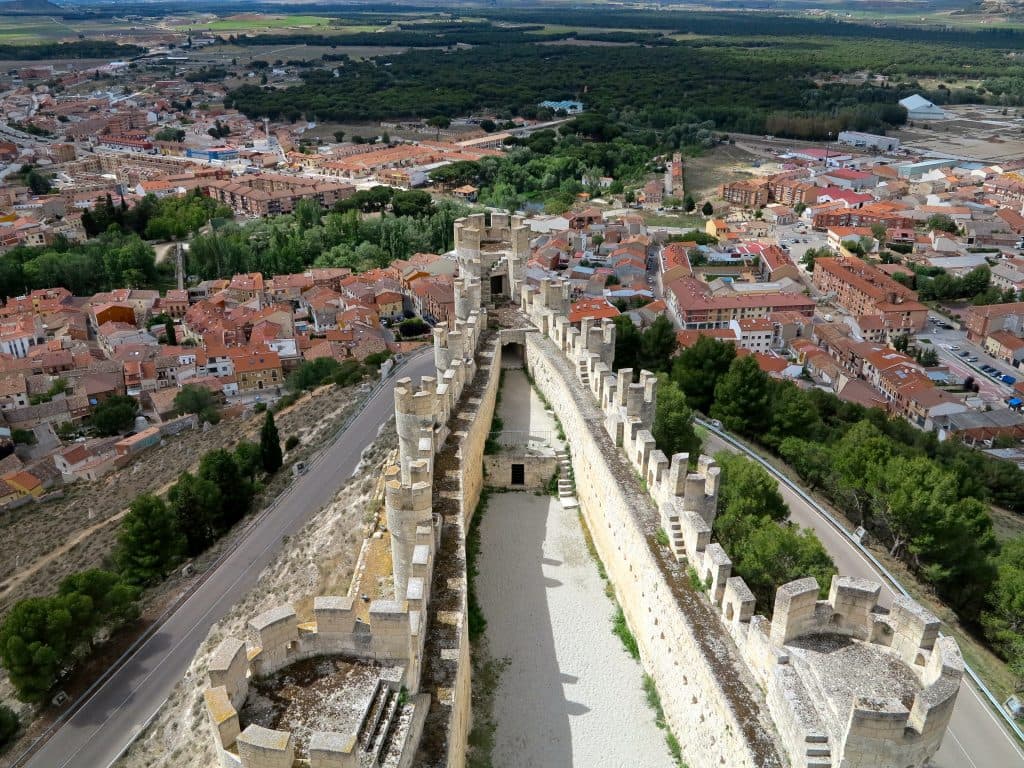 Plaza del Coso
Each year in August, the streets of Peñafiel are filled with families celebrating the festivities of Nuestra Señora and San Roque. During this time, a bull ring is installed and the city buzzes with excitement and adventure. The square is also used throughout the year for events and festivals. 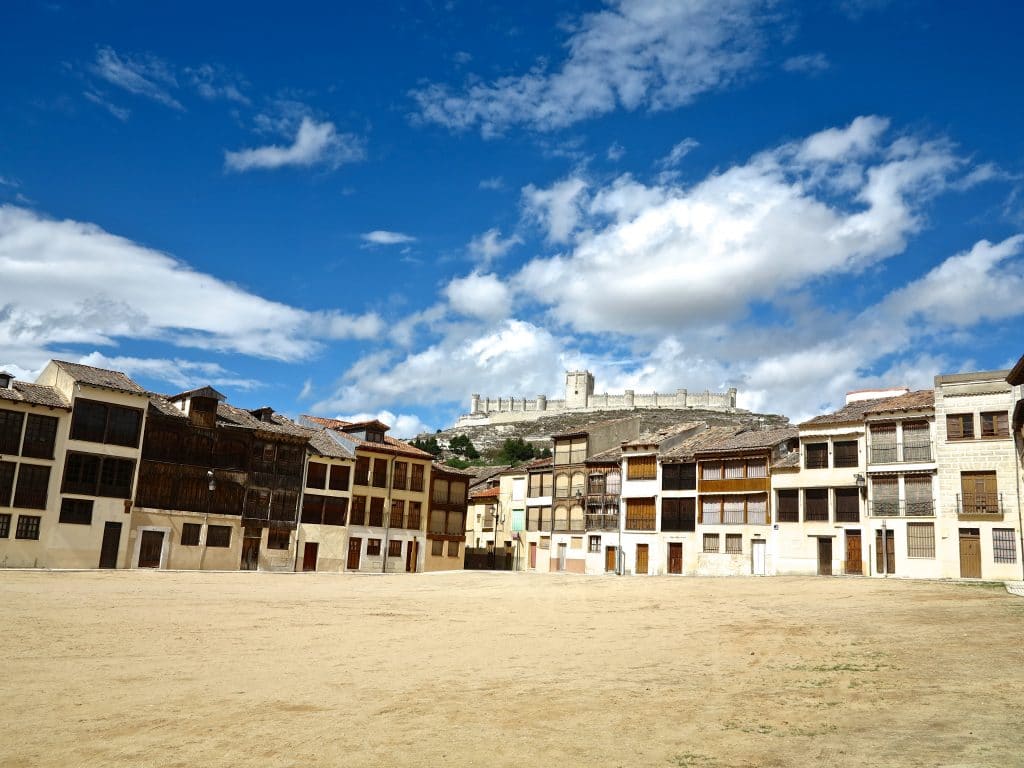 Emina Ribera del Duero
With just over 500 inhabitants, wine institution Emina is located within Valbuena de Duero which is better known as the “Wine Golden Triangle” since it contains within its municipal district some of the most famous wineries in the world. While they continued to hold onto their traditions, Emina invests big in their Integrated Sustainable Development Project and R&D; having recently successfully released an alcohol free wine into the Asian market. 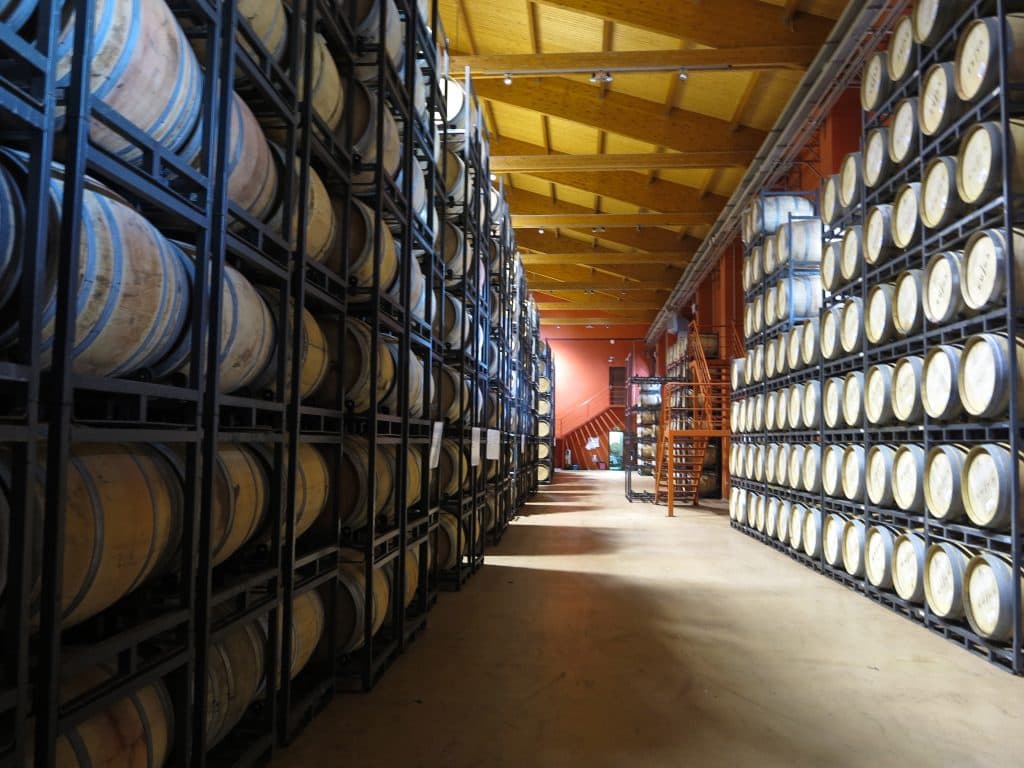 Colegio de San Gregorio
Featuring a gorgeous and intricate facade you could spend hours admiring the Colegio San Gregorio theology. It was originally a school for Dominican monks and now houses the Museo Nacional De Escultura. 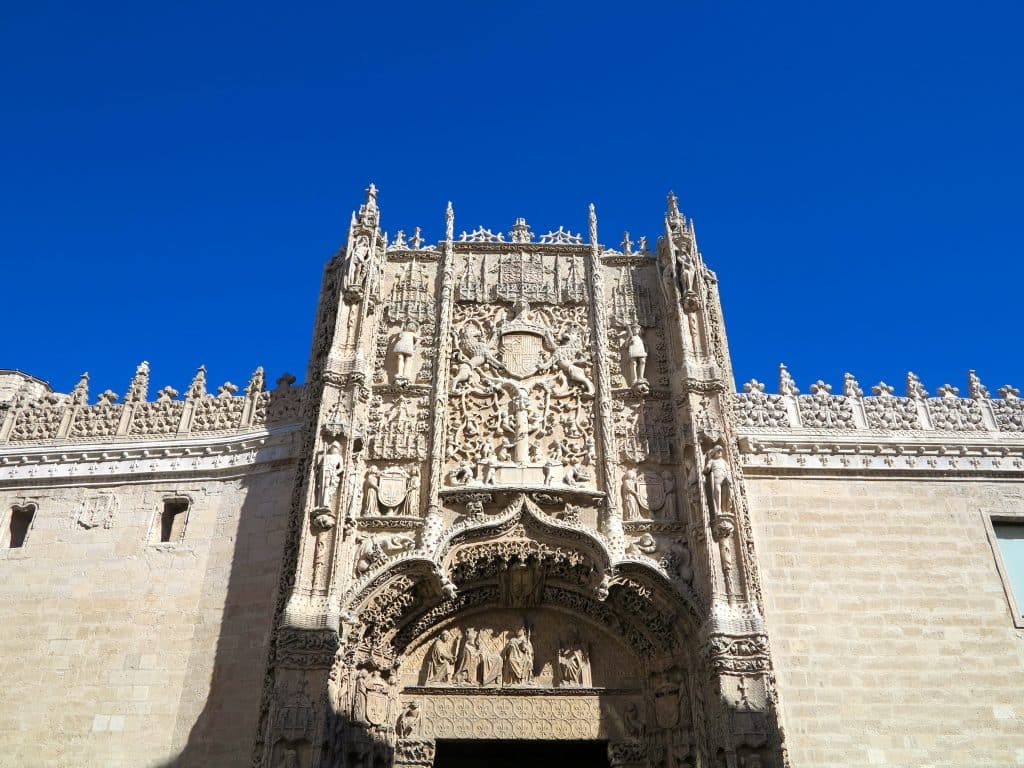 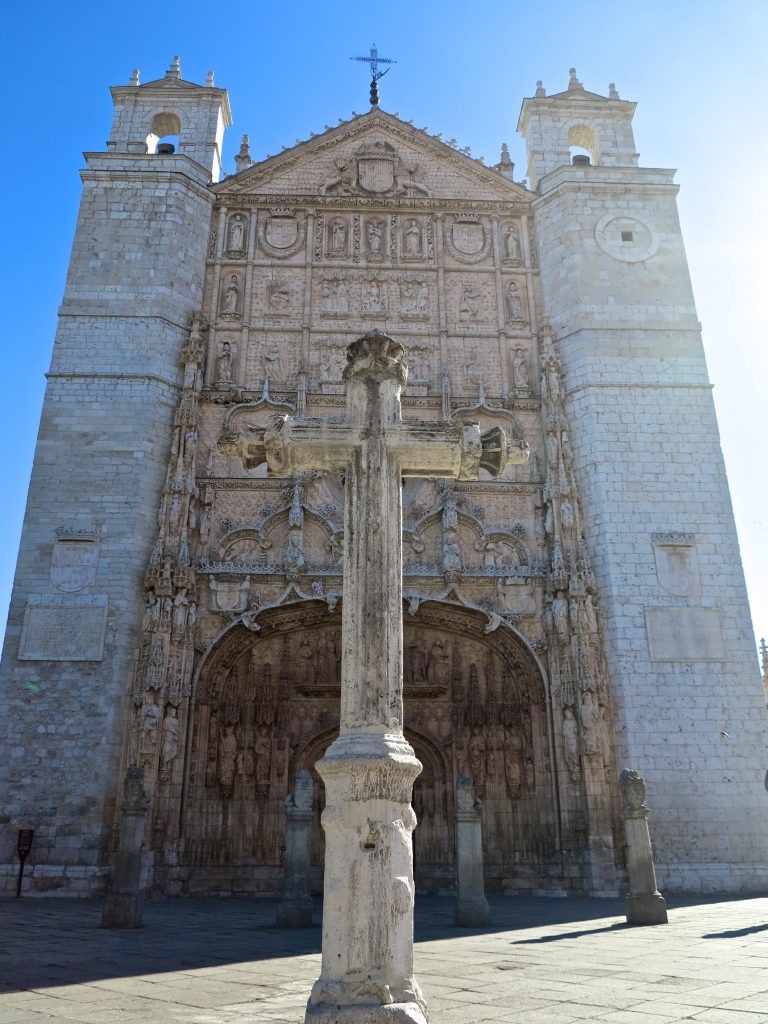 Playa de Valladolid
In the summertime the city turns this park along the river into the favorite spot to cool off on a hot day. Have a dip and then take a stroll into the rose garden.

Main Square
The main square in the heart of the city is said to be where Christopher Colombus lived his final days before passing away in a Monastery located on the square. Despite it’s dark history, the square buzzes with life and is a great spot to wander around and enjoy a drink.

To eat in Valladolid
Los Zagales de la Abadia: A fantastic tapas restaurant has won numerous awards and is famous for being one of the best tapas restaurants in the world. I recommend dining on their very reasonably priced tasting menu with matching wine because they do a bangin’ job at it. The quality and creativity of the food and overall experience of the meal is something you will remember for a lifetime. 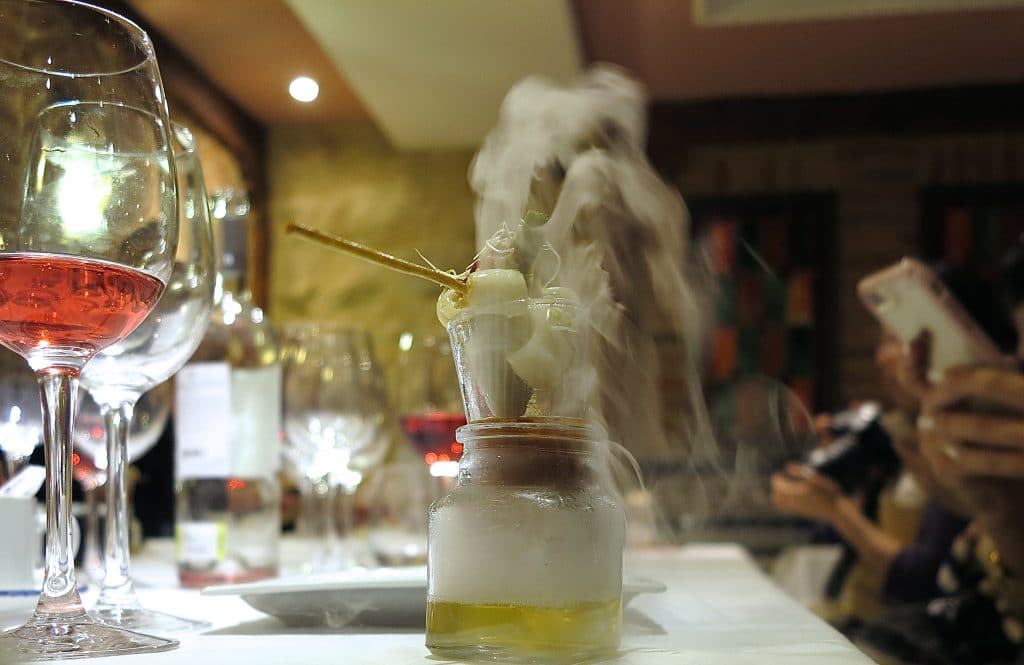 To sleep in Valladolid
Castilla Termal Monasterio de Valbuena: Your chance to spend a night in a 12th century Monastery turned luxury hotel and award winning spa. It really is a spectacular property and it’s well worth exploring their grounds as it’s located along the river and between local wineries. 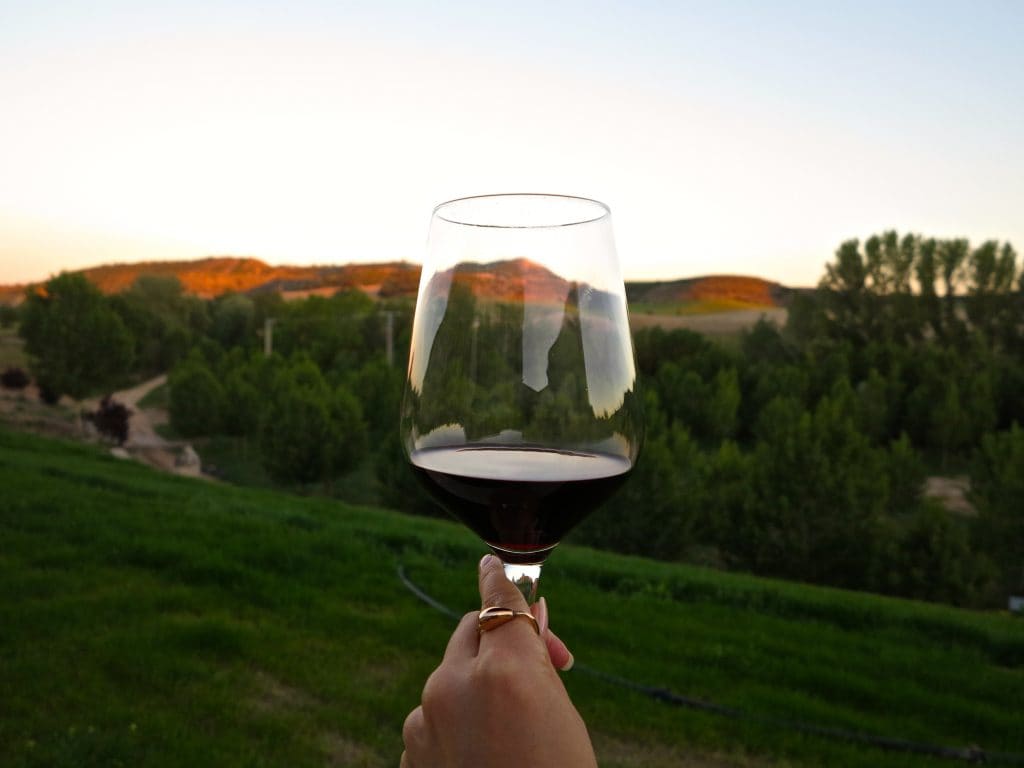 Soaking up the view from the Castilla Termal Hotel 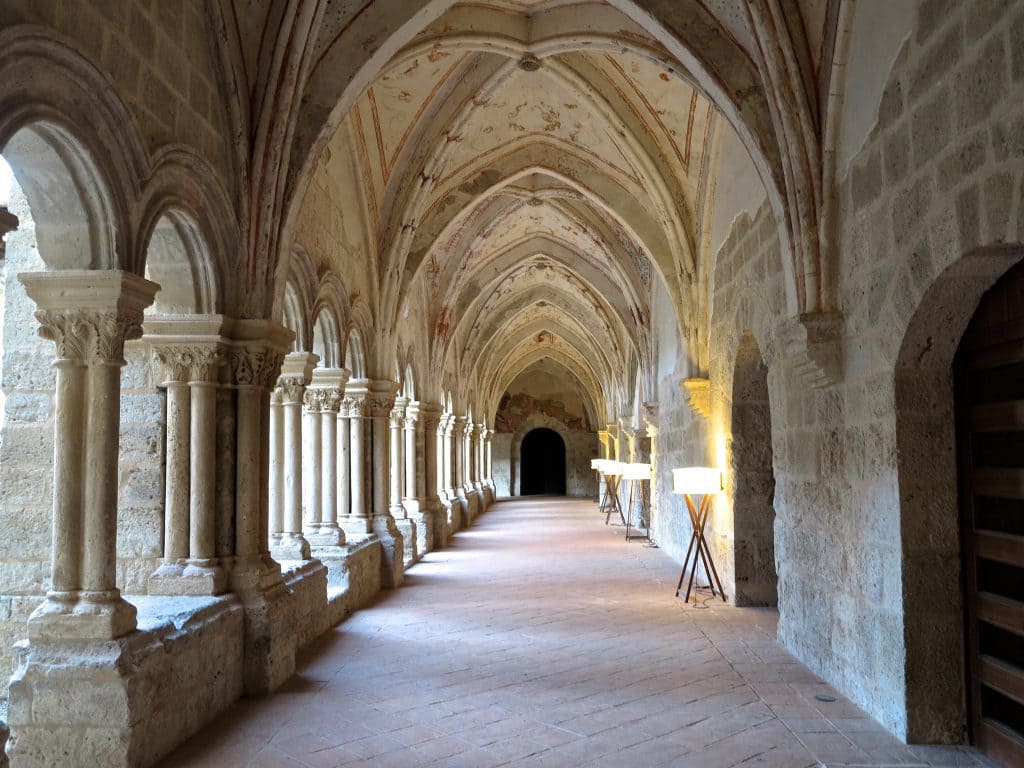 Salamanca was definitely my favorite city on the trip because as soon as you enter, you’ll feel that the city is alive and people are exuberant. Salamanca boasts the oldest university in Spain which is reflected by a very large student population. Wandering the streets of this city is truly majestic as at every corner stands another magnificent building with a fascinating and rich history.
To do in Salamanca
Main Square
A typical Spanish square that’s always bustling. Grab a seat, order a drink and watch the world go by. 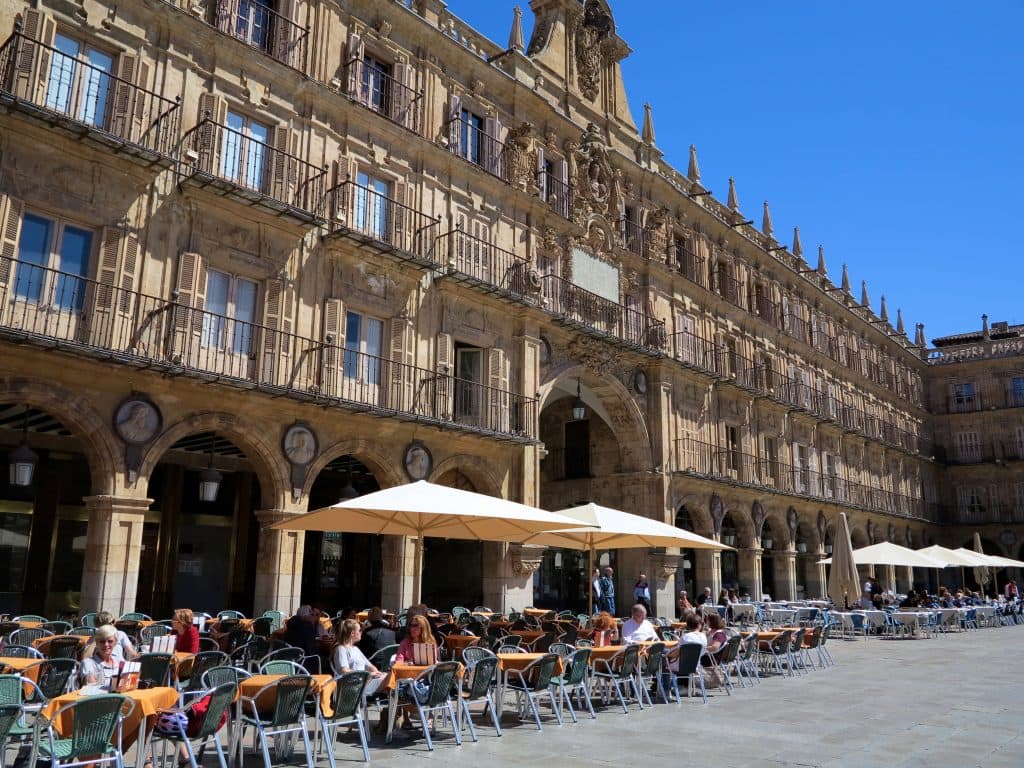 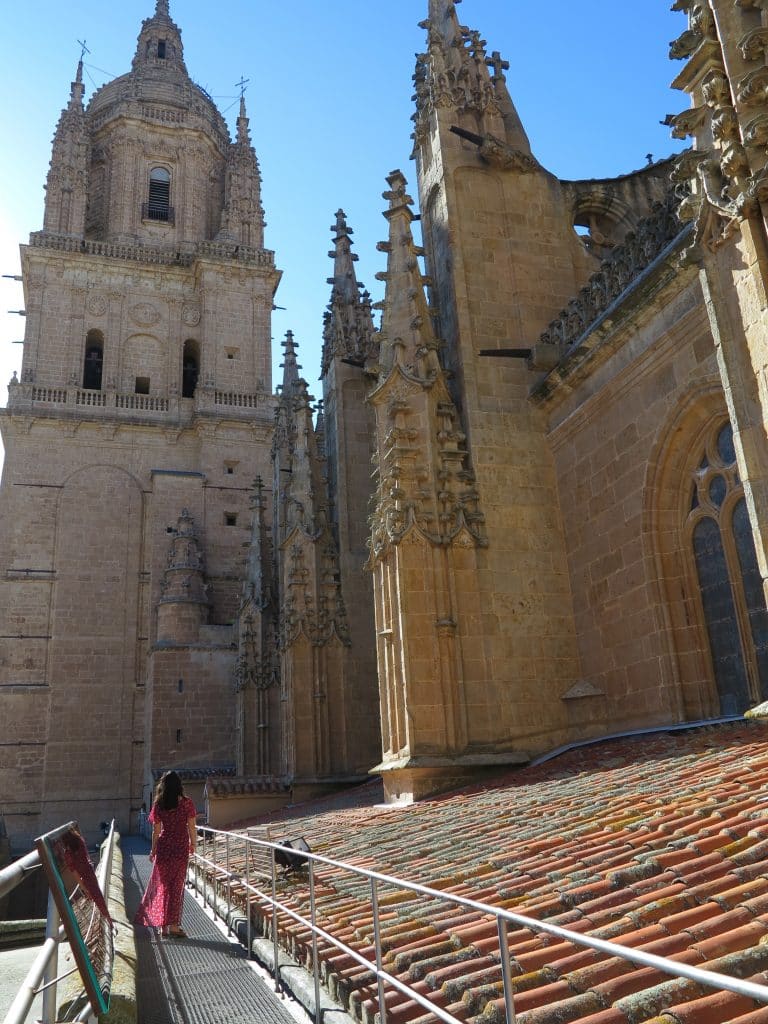 Top of the New Cathedral of Salamanca 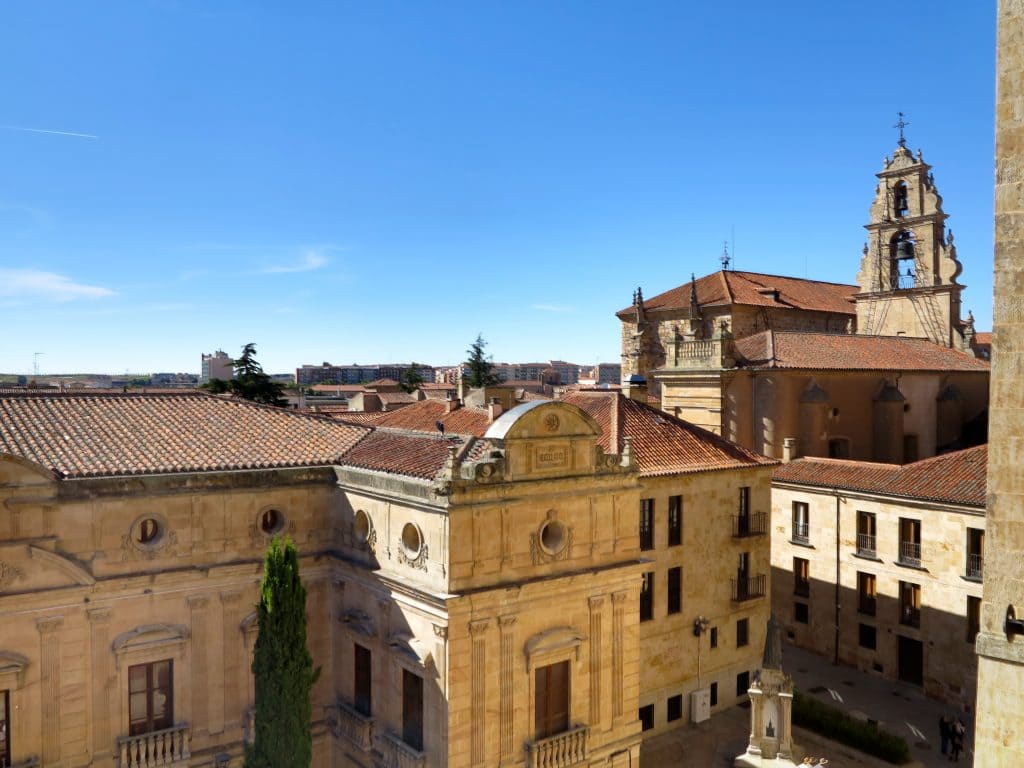 View from the Cathedral of Salamanca

Salamanca University
The university was founded in 1134 and originally recognized as a cathedral school. You can still see the description of the subject above the class room doors from the 16th century. Each color belonged to its own subject, eg: red was for law and blue for theology. Be sure to take a look at the library where you will find some of the world’s first ever produced globes and printed books.
* Fun Fact: What we know today as ‘busking’ is said to originate here. Wealthy students would spend their years worth of money on women and wine in the early few days of school, leaving them nothing for the remainder of the year. They had no choice but to play music on the streets for money so that they could eat, drink and pay tuition.
To eat in Salamanca

Don Mauro: Located on the Plaza Mayor, Don Mauro is a spacious restaurant with azulejos painted white and blue tiles and serves up both regional dishes and surprising modern delights.

Víctor Gutiérrez: If you’re looking to splash out on a meal in Salamanca, then visit this restaurant which was awarded a star by Michelin’s Red Guide.

To sleep in Salamanca

Salamanca City- Hospes Palacio de San Esteban: Located in the heart of the city, the building was originally the Convent of San Esteban. A romantic hotel fit for royalty which comes at a very reasonable price at 130 EUR per night.

Room Mate Vega: Lighter on the wallet but they definitely do not skimp on quality or service. Enjoy modern, clean and well equipped rooms a short walk from Plaza Mayor for around 70 EUR per night.

I hope you enjoyed my little tour through the Castilla y León region and I hope I’ve encouraged some of you to visit this gorgeous region of Spain. If you’re not able to make it over to Spain this summer, then travel to the taste of Spain from the 12th-18th of June in The Netherlands for National Tapas Week in celebration or enjoy in one of the big cities in the world World Tapas Day (15th June).

About the author
Hi, I’m Emily. Born in Sydney, made in the world. I’m addicted to traveling and love throwing myself into exciting and sometimes delicate situations and experiences to ensure I always come out with the best stories and make the most of my adventure. Currently I’m living in bustling Dusseldorf, Germany and can not wait to find out where the world will take me next! Follow my adventure on  Instagram or Snapchat .
0
0
Emily 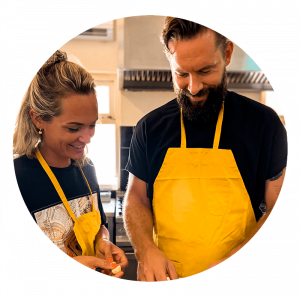 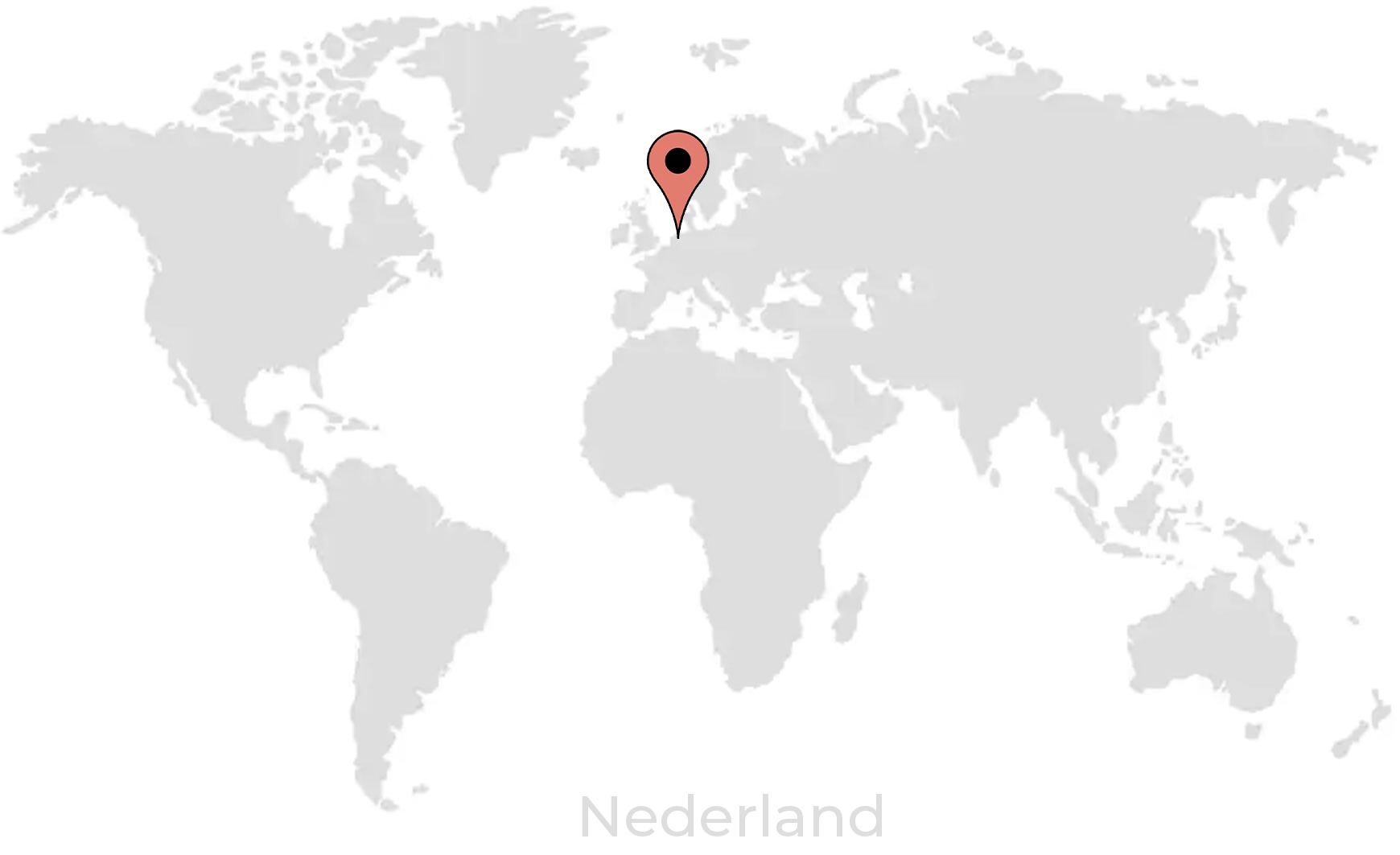